This lesson plan falls under the area of Measurement and Geometry in mathematics and has been created to develop students understanding of smallest to biggest. I would use this lesson towards the end of teaching the concept and use it as an assessment and portfolio piece to examine if students have developed the concept.

As a result of this lesson, students will be able to:

Students would need to have had hands-on experience in developing the concepts of smallest and biggest and understand their meaning.

The afternoon prior to this lesson you would need to have read the text A Pig is Big by Douglas Florian to the children and discuss what they think the story is about.

A greater number of objects and differentiation in size will be given to those who are able order objects from smallest to biggest and need extending.

For those who are struggling with the directionality of the concept of smallest to biggest I would suggest having either a blank sheet of paper and allow the child, with assistance, to write smallest on the left hand side and biggest on the right hand side.

For those who are struggling, I would also leave the example of smallest to biggest up for students to have as a visual aid.

Whilst students are illustrating their objects take photos of their play dough sequence to use in their assessments. 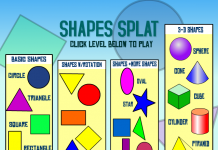 Learning About Shapes: A 2 week unit of lesson plans on...